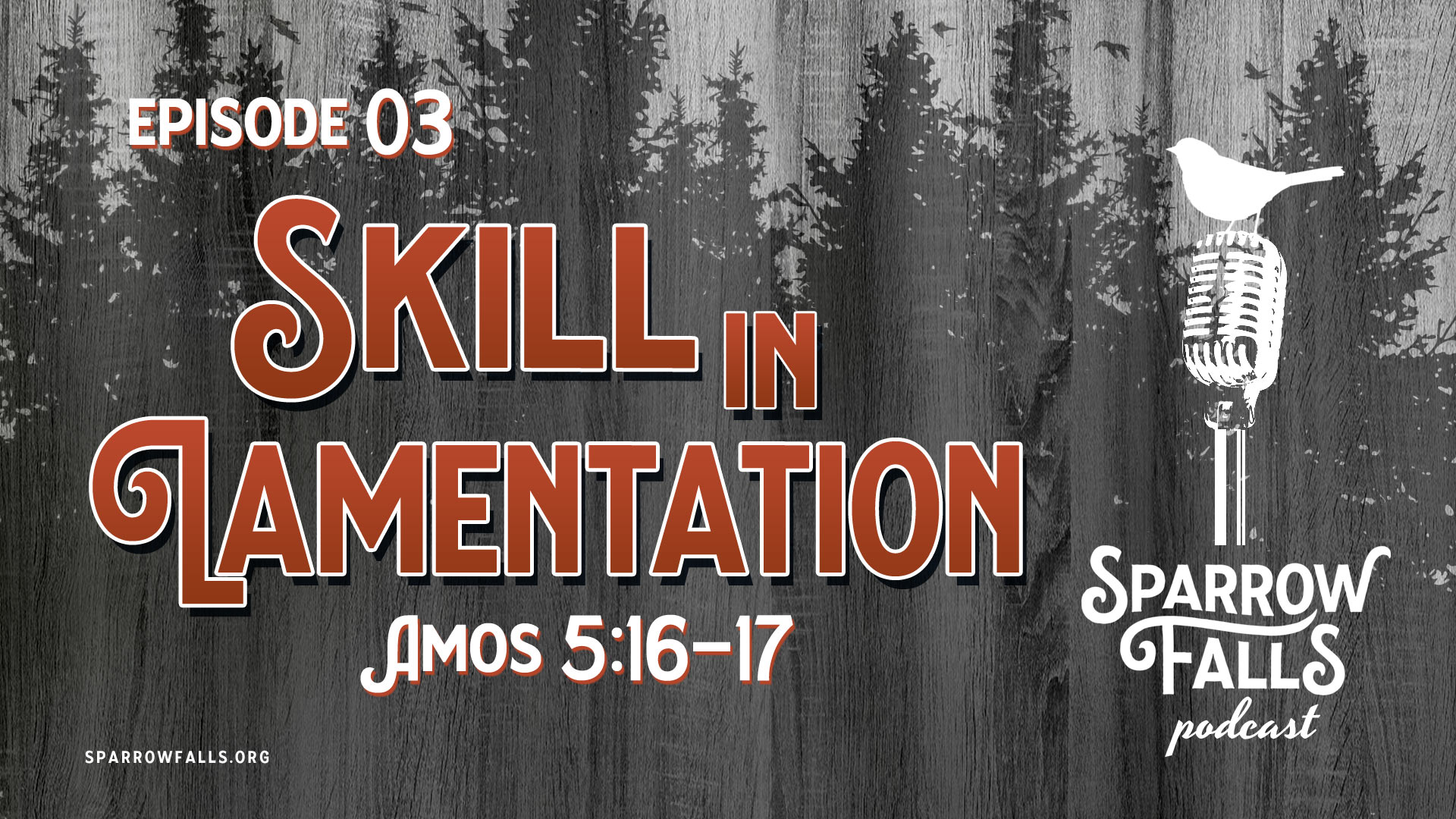 What does it mean to be skilled in lamentation? Skill and lamentation are words we don’t think belong together. Lamentation isn’t a skill. It’s a weakness, a detriment, something to suppress, something to avoid. Those who mourn, grieve, and weep, for too long are people who need to see the counselor or psychologist. Lamentation is something to be fixed, not something to embrace. The sooner someone gets over grief the stronger we perceive them to be.

In this episode we will look at what the Bible calls a skill in lamentation. To lament is to be human. It’s to be Christian. The Christian church needs to recover this lost skill of lament.

Those who mourn, grieve, and weep, are people who need to see the counselor or psychologist. Lamentation is something to be fixed, not something to embrace. The sooner someone gets over grief the stronger we perceive them to be.
What does God think? Consider this passage in Amos 5:

In this scene, Amos describes a nation in lament. There’s wailing in city squares and streets. There’s mourning in the farmland and vineyards. City dwellers, farmers, and vineyard keepers are all wailing. And there’s someone else among them. Those who are skilled in lamentation. Among the ancient Hebrews, lamentation was an accepted, and healthy, part of life. They understood that mourning, wailing and lamentation are appropriate responses to life’s tragedies and a healthy expression that helps healing. In this scene their wailing wasn’t part of their ministry. They were wailing in real sorrow themselves, along with everyone else.

We westerners are uncomfortable with lamentation. We bottle up our feelings. The ancient peoples not only expressed lamentation, they employed people who had skill in lamentation. Who were these people? They were people who helped a people to mourn as a community. Just as we have people lead us in worship, the ancients had people who would lead them in lamentation. They set the tone in a setting of sorrow. They created an atmosphere for the appropriate expression of sorrow and grief.

Remember when Jesus raised Jairus’ daughter? We find them here, too.

Then came one of the rulers of the synagogue, Jairus by name, and seeing him, he fell at his feet 23 and implored him earnestly, saying, “My little daughter is at the point of death. Come and lay your hands on her, so that she may be made well and live.” 24 And he went with him. (Mark 5:22-24)

While he was still speaking, there came from the ruler’s house some who said, “Your daughter is dead. Why trouble the Teacher any further?” 36 But overhearing what they said, Jesus said to the ruler of the synagogue, “Do not fear, only believe.” 37 And he allowed no one to follow him except Peter and James and John the brother of James. 38 They came to the house of the ruler of the synagogue, and Jesus saw a commotion, people weeping and wailing loudly. 39 And when he had entered, he said to them, “Why are you making a commotion and weeping? The child is not dead but sleeping.” 40 And they laughed at him. (Mark 5:35-40)

By the time Jesus arrived at Jairus’ home it was full of these people skilled in lamentation. They had already stirred up the scene into a commotion of weeping and wailing. Jesus tells them the child isn’t dead, but sleeping. How do they react to that? How would Jairus have reacted, having just lost his daugther? How would his family have reacted? They wouldn’t have laughed. This was no time to laugh no matter how funny. They people who laughed were those who worked up the commotion of loud weeping and wailing.

Now, I know from experience that weeping is closely related to laughter. It’s not unusual for people deeply mourning to suddenly turn to laughter. But I don’t think that’s what happened here. The child was not dead for that long. The people mourning were people skilled in lamentation. They had no attachment to the child.

The point of this passage in Mark is not to cause us to look down our noses at the lamenters. Though, their cultural practice of lamentation seems laughable to us, it’s not intended to be a critical social commentary. The only thing we can possibly hold against these laughing lamenters is their disbelief of the words of Jesus. That’s it. And even that judgment is on shaky ground.

Rather than criticize their tradition of lament, this should cause us to ask why our culture does not have a tradition of lament. What little we might have we’re gradually losing. We dress up in black, but even that is being discarded. We’ve turned our funerals into celebrations of life, even at the behest of those who know they’re dying. “Don’t have a funeral for me,” we announce. “When I die I want you to have a party.” We cannot bring ourselves to face the horrific reality of death. We simply place no value in mourning, lament or grief. We prefer to deny the place of lament, than to admit it’s a real, proper response. We’ll allow for a somber moment, and that’s about it. Skill in lament? Ha! We barely allow for its existence. And this is to our own detriment.

People must be given the opportunity to properly grieve. And Christians should be at the forefront of helping our people to not only grieve well, but to grieve at all.

If our worship leaders were real, well rounded, biblically grounded worship leaders they would be skilled in lament. We need to sing songs of lament — songs that we don’t have in our Christian canon of song. We think we’re so spiritual with our big worship culture, yet we have so few songs of lament, and fewer that reach the depths of lament we find in the Psalms. One third of the psalms are psalms of lament. Were lucky to think of three songs of lament among our modern hymns and worship songs. Lament is an act of worship, and product of good, biblical theology. Yet the world seems to be better at lament than the Christian church. We need to ask ourselves, why? As shepherds and leaders, we have to give our hurting people songs that give voice to the real sorrows and traumas of life, and we have to teach the others the proper place of lament. To not do so amounts to a shepherding sin.

We need to teach lament. We need to model skill in lamentation. We need to pray prayers of lamentation. Our churches desperately need it. This is most readily apparent when someone in our church experiences grief. How do our people respond? We view these people as people who need fixing. In the two minutes we give to people as we leave our Sunday morning services, we say the dumbest things to grieving people to try to lift their spirits or put them on the road to healing. God’s got this. Be strong in him. Pray it through! Try to think of the happy things. The pain will get better with time. I’m sorry you lost your child, but be thankful you have the others. I know we mean well, but the reason we don’t have anything better to say is because we don’t have a tradition of lament and we have no people in the church who are skilled in lament.

There is a time to mourn. And we’re called to mourn with those who mourn. That’s the proper response to someone in mourning. Come alongside them and mourn. Shouldn’t we take a cue from ancient Jewish culture and develop people in our church who are skilled in lamentation? Maybe we don’t need people like those at Jairus’ house who were making a commotion with their weeping and wailing. Maybe we need people skilled in lamentation who write songs of lament, who teach us how to lament, and who model what it means to walk alongside those who mourn.

After we lost our son, my wife and I spent a lot of time with other Christians who lost children, parents and spouses. Most of those grieving people were not helped by their churches. They were ignored, shunned, or criticized for not being able to move on as quickly as others thought they should. Why aren’t they at church? They’re not handling it well. They shouldn’t have quit their ministry. How long have they been mourning? We really see the true depth of someones faith in a situation like this. Three months is long enough to mourn, they really should be getting back into things. I think they enjoy the sympathy. I wonder if their faith is real?

Sometimes these things are true of those who mourn. But, knowing that we exist in an anti-lament culture, these are not the things we should default to. We are not a lament-literate, grief-literate, trauma-literate society. The fact that we need letters, and research, and fancy names, and steps of recovery, demonstrates how little we know. Lament has become a specialized mental health field in our culture. The ancient and more primitive cultures don’t need science to justify the need for lament. Their wisdom puts us to shame.

The Western church must recover the lost skill of lamentation. We need to learn to mourn together as a church family, and we need to be able to sing about it. Lamentation is not for the psychologist to handle, or the psychiatrist to medicate away. Lamentation is for the church to become skilled at. To embrace lamentation is to understand the brokenness of the world, the fallenness of man, and the hope of Christ. To avoid lamentation is unbiblical, immature, spiritually warped, and quite possibly a denial of our faith.

We must learn to lament, and lament well. And for those of you who are here because you are in a season of lament, as am I, we need to exercise patience and grace with our brothers and sisters in Christ who don’t know how to help us. We are all part of this culture that doesn’t have a good tradition to lament. And even though you and I are in this season of lament, there is still much for us to learn as well. Share with them the resources you have found to be helpful.

Surround yourself with others who understand your pain, who are willing to come alongside you to lament with you, to learn as you learn.

And pray that God is able to use you to teach your church and your circle about how to lament. And as you heal, you will have eyes to see others who need to lament, and need people in their lives to walk with them through their difficult season. When you are ready, you be that person who begins a ministry of lament for others who are in pain. Let God bring beauty out of the ashes of your sorrow.